The 2014-2015 school year has at last reached its conclusion, and it’s time to take a look back at some of the instances that made it memorable.

After a slow start, the football team rebounded oto reel off win after win, including victories over The Potomac School and Brentsville. Then, with its playoff hopes hanging in the balance, the Wolves pulled off one of the most memorable victories in the brief historyof John Paul athletics, defeating rival Bishop Ireton at home to clinch a spot in the four team VISAA playoffs. Because of the way the seeding worked out, it was to be a rematch with Ireton the following Saturday.

Who could forget the week that followed? There was a buzz in the air; a tangible excitement among the student body backing the team as it sought varsity football’s first ever playoff victory. There was a pep-rally for the team, filled with school-wide chants of “I believe” and of course, the iconic splits of Mr. Malebranche.

While a victory was not to be in the game, it was a feat of itself to beat Ireton in the first place just to get there. The team showed that it wasn’t as much of a push-over as others thought they were, and they went out and proved it all season long. 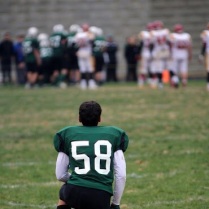 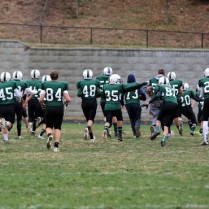 As the final leaves fell from the trees, as Uggs came out in full force, and as the temperatures plummeted, it was time for the winter sports to get underway.

In their first home game of the season, varsity boys basketball faced a tall task in Clinton Christian. Ranked in the top-five at the time in the Washington Post, and with college scouts in attendance, it seemed John Paul would be out-matched. However, the Wolves came out strong and took them down, in what was another statement victory for John Paul athletics.

The crystal-ball dropped in Times Square, and as the calendar turned to 2015, the Wolves were not nearly done with their notable events. The annual Orange Out in memory of Sarah Jakielski took place in January, and varsity boys basketball suffered a heart-breaking, narrow defeat in a thriller of a game. A short time later it was ESPN Night at a basketball game. Then, senior Josh Cox added his name to the list of John Paul athletes to sign Division I National Letters of Intent, as he penned his to William and Mary for Soccer. The winter season also saw the addition of an 18th varsity sport, indoor track. You can read more about all of those significant events, plus summaries of all the Winter Sports, by clicking here. 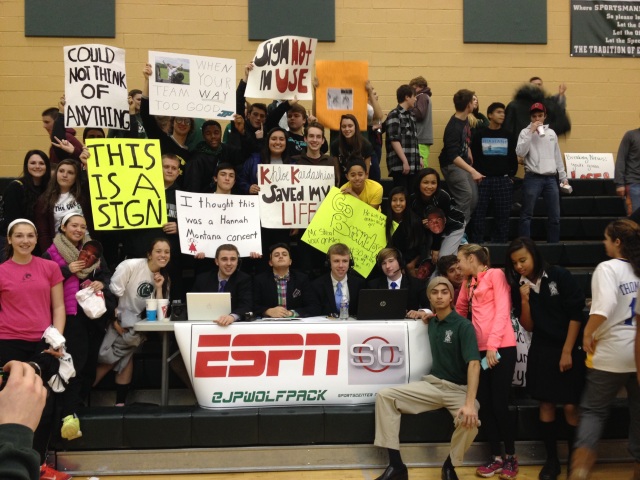 The crowd and their signs along with the SportsCenter crew. 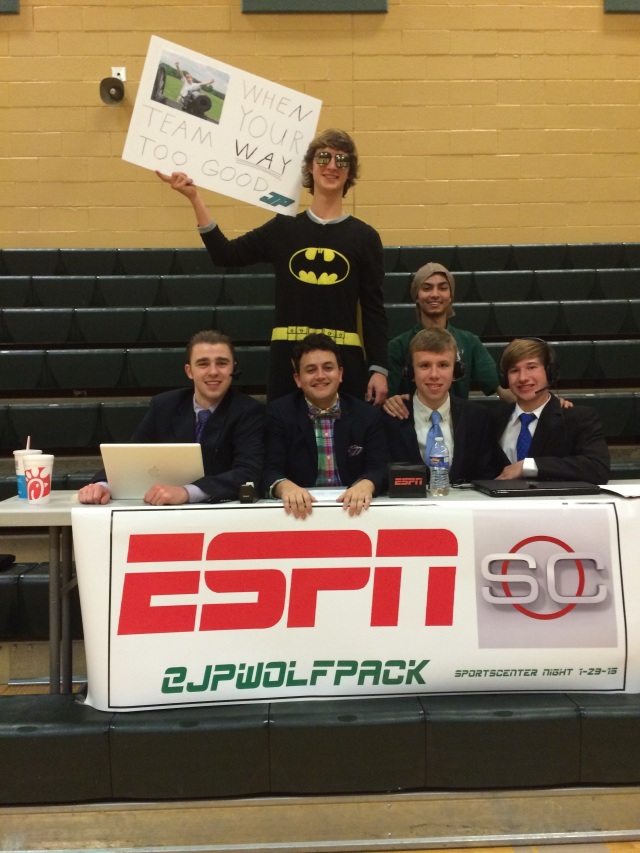 One last mammoth of a win awaited, this time on the boys basketball senior night when they took on powerhouse Benedictine from Richmond. Like Clinton Christian, it would take a gargantuan effort to come away as the victors, but this task did not daunt the Wolves. They emerged with the win, capping off their season in grand fashion.

In March, it was a notable gesture rather than an event that stood out among the rest. Junior Josh Holmes (who has since been elected Student Body President) contacted the cheerleaders for the Washington Wizards to see if they would be willing to do anything for Options student Natalie Beck. Natalie, an avid cheerleader at JP herself, had recently lost her father unexpectedly. The cheerleaders were happy to help with the situation, and it was a very moving event when Josh presented Natalie with the package after Mass one day. Be sure to read all about it here.

The spring was highlighted first by two additional Division I signings. Seniors Katherine Duquiatan and Sean Tully signed their National Letters of Intent to the University of North Carolina at Asheville and Radford University, respectively.

As I conclude my last article for Johnpaulwolfpack.com, I just want to take this opportunity to say thank you to all of you who read the articles and supported the site along the way. I started the site not knowing what kind of reception it would receive, but over the last two years I have appreciated all of the feedback and support. I have truly enjoyed bringing the athletic news of Saint John Paul the Great to you, and I hope you have liked reading them in turn.

So once again, thank you to everyone who supported this site and made my job fun and enjoyable.

Saturday, May 9th bared witness to yet another first for Saint John Paul the Great Catholic High School.

Entering Catholic States, the boys track and field team was looking to emerge as champions for the second year in a row and third time in four years. On the girls side though, they were looking for their first ever Catholic State title, and seniors Tashana Simon and Katherine Duquiatan were prepared to lead the way. They would need to surpass their closest challenger, fellow diocesan school Paul VI.

The girls did not only win, they dominated the competition. Had senior distance runner Denise Gallant not been injured for the meet, their margin of victory would have likely been even greater. Duquiatan won the 100m hurdles by nearly two seconds, and was followed in second place by fellow JP runner, freshman Jessica Hall. Katherine was also victorious in the 300m hurdles. Tashana Simon came in first in the 100m dash and 200m dash, and finished second in the 400m dash. In the distance runs, senior Caitlin St. Amour was second in the 800m and added a top-5 finish in the 1,600m. Freshman Claire Garster added her part by coming in third in the 3,200m run. As far as relays are concerned, John Paul finished third in the 4x400m.

Both Duquiatan and Simon finished in the top 3 in high jump. Simon won the long jump and Katherine was right behind her in second. Then Tashana finished second in the triple jump and fellow senior Danielle Bourneman came in third. 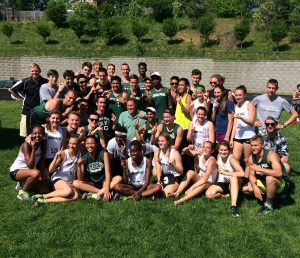 Not to be overlooked was the throwing performance of senior Sonia Okolo. She placed first in both the discus and the shot put, pouring on more points to the Wolves already vast total.

The girls track and field team finished with 175 points, and their next closest competitor was Paul VI with 132.

On the boys side, things were not as smooth-sailing. In fact, the victory was only sealed by clutch showings in the meet’s final events. Josh Glascock and Michael Horan finished first and second, respectively, in the 110m hurdles, and then they switched spots for a one-two finish again in the 300m hurdles. Horan also placed third in the triple jump. As usual, Sean Tully and Andre Gallant cleaned up shop in the distance events, with Tully finishing first and Gallant third in the 1,600m, followed by Tully and Gallant also coming in first and second respectively in the 3,200m. JP finished third in the 4x100m relay and second in the 4x400m relay. Senior Michael Mancini placed second in the shot put, and junior Chauncey Wallace jumped his way to second in the high jump.

The John Paul boys completed the sweep of the rest of the field for JP in the Catholic State Championships by scoring 124 points, 19 more than second place Benedictine.

The Wolves travelled to Richmond for the VISAA State Meet on May 16th. While the teams did not bring any hardware home, an individual performance for John Paul stood out among the rest.

Senior Sonia Okolo was the VISAA Division I shot put State Champion, and also placed second in the discus throw.

Congratulations to Sonia and the rest of the Track and Field team for their season, including these successful past two weeks!

As with any new school, there are frequently events that are marketed as happening at home for the first time. One of these events that is due ample publicity is this Saturday’s Track and Field Catholic States.

Upon learning that the event was in need of a location this year, John Paul threw their name in the hat and after much discussion, was given the opportunity to hold the event on their home track. The team, coached by two-time All-Met Coach of the Year Mike Dobson, has consistently been a successful sport; one of, if not the most, successful of the 18 sports John Paul offers. In fact, the lone “State Championship” banner hanging from the gym’s wall is the Catholic States banner. The boys team were the Catholic State champions in 2012 and won it again last year in 2014. As defending champions, they go into the meet motivated; striving to repeat as champions and add a third year to the banner.

The field events begin somewhere between 10 and 10:30 while the running events get underway at 11:30 AM.  The meet and its numerous events will then continue on for a large portion of the day. There will be about eight teams each for both the guys and girls, so the grounds will be packed with people looking to observe the various events. As stated, the boys team is looking to defend their state title, while the girls are pursuing a very real possibility for their first state title.

Interesting races abound throughout the day, including the 4×1 and 4×4 relay, the high hurdles, and the mile run. As this is such a unique opportunity to show support of the team, the track members hope the school makes their presence known on Saturday and rallies around them as they compete.